A sewage treatment plant belonging to a major regional water board. The plant handles raw sewage and staff safety is a prime consideration.

Thorough repair to a 100m concrete walkway around a sewage tank, plus a reliable anti-slip surface. The tank was suffering from a common problem: the rolling wheel on the end of the rigid arm that distributes the sewage had worn away the perimeter flat surface. The walkway was unsafe and the wheel was getting stuck. 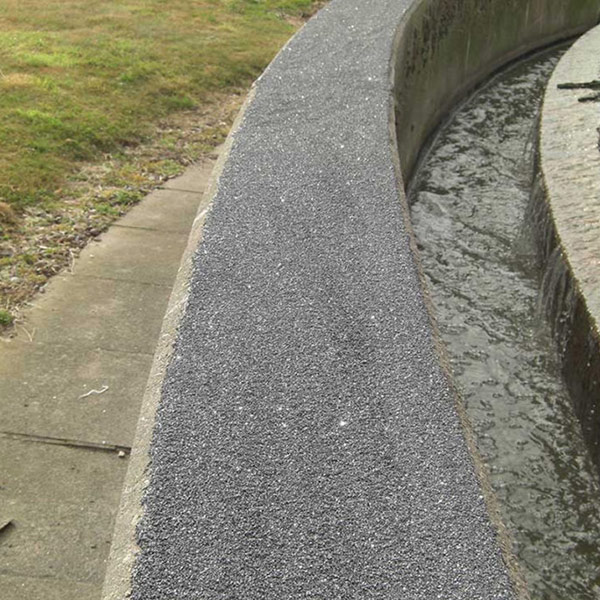 The tank was taken off-line and the wheel around the perimeter lifted so we could treat the entire surface area. After an initial inspection, we started to repair the damage to the existing concrete using epoxy mortar. Once the mortar had dried, we added a new anti-slip system. The system we chose used an epoxy primer incorporating a silicon carbide broadcast. This created a strong, safe and hard-wearing surface for the walkway.

We don’t always install full floors. We can repair and reinstate areas of that have been damaged and resin seal into the adjacent floor.

Our contact on site was so pleased with the work that he called us to praise the quality of the workmanship and the professionalism and attitude of our staff. He subsequently asked us back to work on a second tank. We have now done a wide variety of jobs for the water authority, including a programme of repairs to loose concrete falling from the ceilings of pumping stations. Contracts have totaled up to £100,000 a year.